A downloadable game for Windows

My submission for the 2017 ShenaniJam, made on the HTC Vive. Work in a poorly-optimized kitchen, making nachos and burgers for your customers! They all have a preference for differently-colored plates! Check out the TV monitor to see what food they want.

Hit the button to the left of the levers above the conveyor belt to make your meal. If you can't keep up with your customers, they explode!

This is VR, so just reach out and touch stuff! Use the main trigger for interaction; you can just hit the wall buttons, no clicking required.

You can play without VR using VRTK's simulation mode, but you won't be able to play very well - a HTC Vive is highly recommended.

I hadn't made a sizeable program in years, and have never made a game of my own design (though I have remade a couple of games from the C-64). The ShenaniJam was the perfect chance to learn Unity and how to work with VR.

I took this jam on solo as I wasn't sure I could finish. The Butterscotch Shenanigans guys were right - this was really rewarding and has left me with a renewed motivation for making stuff.

The theme I was randomly assigned was, you guessed it: Nacho-Burger Gradient.

Audio is a mix of recorded sounds from my wife (the "mmm", grumble, and eating sounds), as well as free audio from the Sonisss.com GDC Audio Bundles from 2015/2016/2017. Plus the Wilhelm Scream.

3D assets were purchased from the Unity Asset Store.

Virtual Reality Toolkit (VRTK), a free library, really sped along development by making setting up the controls a vastly easier endeavor than building them from scratch.

Just extract the .exe and data folder and put them in the same location, run the .exe. It would really help if you have a Vive, otherwise you'll be playing in the simulator mode, which should at least let you try out a few buttons. 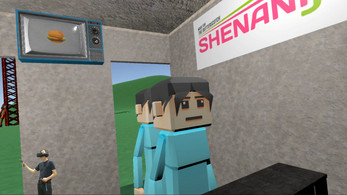 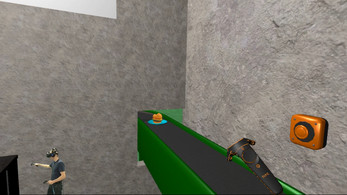 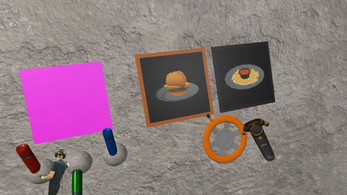