Steal Your Enemies' Weapons and use Them!

Our entry for Global Game Jam 2021, Nine Tenths of the Law follows the theme of Lost and Found -pick up the weapons your enemies leave behind (when you shoot them!) Flying into dropped weapons sticks them to your ship, giving you more firepower to shoot more enemies.

Play until you die... or more likely, until you kill the frame rate. Nine Tenths of the Law is a true jam game, and not yet balanced. See how many guns you can get shooting at once!

Play here in the browser, or for a more HD experience, download the .exe and play on your Windows PC.

Nine Tenths of the Law Was Made By

Check out the kickin' full version of the background track on SoundCloud.

We'd like to put a bit more into the game - do a lot of balance tweaking, integrate the full, adaptive music track, and optimize it.

I really wanted to love this game because I really love the idea presented. A few things hurt though. Please take these criticisms as well-meaning as I genuinely like what you have done here.

Actually picking up weapons is hard. I wish they gravitated to my ship as if by magnets or something, making picking them up as I drift easier.

The drifting is quite hard to pull off. I wish that when thrusting my turn rate went down or something, as a way to pull off looping turns a bit better.

Knowing your speed is really hard because there is little context directly on your movement plane. It seems like everything is either further away from the camera or parallaxing along, which makes judging your speed quite tricky.

Killing enemies drops weapons, but they drop directly under the giant murder ball that is following you. Maybe giving them a kick out in a random direction would help break that up a bit.

The AI only tracks you directly. If they instead had more states it would make them a bit less 'clumpy'. Have them track a random offset from the player when they are outside a certain range, then when they get closer have them target the player directly. 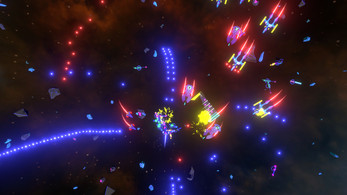 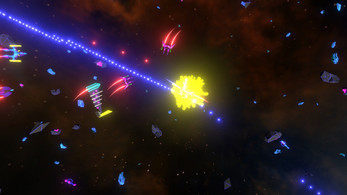 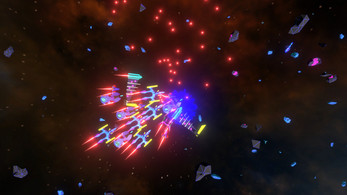